There’s nothing like economy class on an airplane.  Being confined to a couple of square feet on a flight to Chicago seems like a trip to the mailbox compared to the 24-hour flight Addis Ababa, Ethiopia.  Forced to breathe the same dry, recycled air as hundreds of other people and fed dubious in-flight meals (word to the wise:  pass on the chilled shrimp) isn’t something I want to do again next week or even next month. 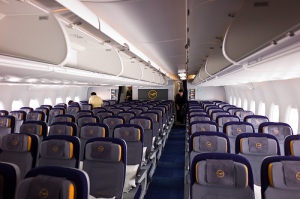 I depleted my cellphone’s reserve power flying over the landmass called Greenland.  Knowing I had 16 more hours of flight time, I made the disciplined decision to keep my iPad in its case thinking I’d probably need it during the last stretch.  Maybe there’s some invisible teller parceling out nuggets of sleep on flights over 10 hours.  And maybe, there’s not enough sleep for everyone, which would explain why the only part of me to fall asleep was my right leg.  The gentlemen on either side of me must have gotten in line before I did, as both were oblivious to anything other than the dreams REM provided.

I found the AARP magazine in my seat pocket an odd addition to my flight on a German airline.  Here’s a quote from the article written by a staffer at the American College of Chest Physicians on in-flight blood clots, “Traveling in economy class does not increase your risk for developing a blood clot, even during long-distance travel (good news); however, remaining immobile for long periods of time will.  Long-distance travelers sitting in a window seat tend to have limited mobility, which increases their risk for DVT.”  DVT?  I scanned the article looking for the meaning of DVT.  Finding none, I was forced to come up with my own definition:  Dreaded Vascular Trauma?  Death Via Travel?  I found out later it means deep vein thrombosis.  Still have no idea what that means.

After two sunsets, six meals and ten declinations for a German beer, I arrived to the sights, sounds and smells of Addis Ababa, Ethiopia.  I was seriously unprepared for what I would witness in the coming days. 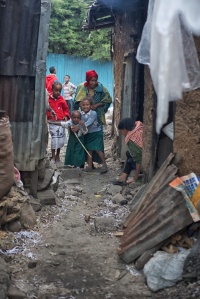 The next 24 hours left me overwhelmed with the pervasive poverty of a city which houses millions of people.  I found it difficult to look in any one direction without seeing someone deformed, debilitated or downtrodden.  People living in one-room shacks fashioned from dung, void of plumbing or electricity, left me convinced of how much I took for granted before going there.  Those early hours dislodged the thankful “clot” nestled deep in my heart.

Today is Thanksgiving; I have much to be thankful for.  I’m thankful for the people of Addis Ababa, who in abject poverty have found a way to be content, joyful and thankful.

4 thoughts on “More Than Thankful”