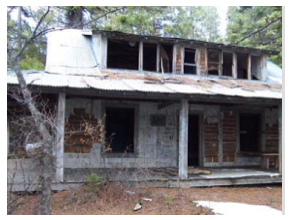 From the bay you can barely make out the outline of the decaying homestead on Cedar Island.  A quick jaunt up the bank and through the trees reveals an eerie sight.  Once the grand summer home of the Marshall’s, the pleasant noise of laughing, carefree children has been replaced with the squeaks of hundreds of bats living within its deteriorating walls and ceilings.  Area locals suggest the house is haunted.  I picture the scene of cheerful gatherings as I step onto the fifteen-foot deep porch that lines the front and sides of the house.  This place must have been incredible.  My friend tells us how he and a couple of childhood friends used to spend the night camped on this very porch when he was growing up.  As he reminisces we step though the front door.

The place is in a painful shambles.  More than one misguided can of spray paint discloses hordes of nefarious riffraff identified with names like Joe, Brian and Shelly.  Are we to care that Sam was here or that Steve loves Mary?  Couldn’t Bob have given us his last name when he sunk his knife into the windowsill thirty-two years ago in 1977?  Doesn’t he realize how many Bobs there are in the world?  How are we supposed to applaud his carving skills?  Oh, careless Bob!  What where you thinking?!  I’ve never understood vandalism.  I wonder who the first incongruous artist was and if they know or even care what their handiwork has produced.  Do they regret what they started?

Standing in the middle of that house is almost surreal.  The dull fragrance of guano has long replaced the scent of summer BBQ’s that surely wafted to the children and guests as they swam at the beach.  Peering out the picture window I see how the calmness of the bay contrasts the tension now resident in the house.  At the risk of sounding too sentimental, it’s sad to see such a grand mansion die like this.

We stroll up the path to a gated fence erected to protect an apple and cherry orchard.  The trees were cut down several years ago to prevent a worm infestation from spreading throughout the Flathead Valley.  The forgotten roots must have gathered strength through the years and we inspected several new trees with ripening fruit.  However, at the gate was the most puzzling cement building:  Four sturdy walls and a roof.  I’m glad that my father-in-law was with us.  As we stood baffled by its existence he quickly painted the scenario of what this building was used for.  It was a water storage shed and provided water to the house fifty yards away through submersed pipes.  He excitedly showed us the ninety-year-old trench where the pipe was laid.  The elevation of the water shed would have produced a good amount of static water pressure and was pure genius.  We walked to the end of the island and back the way we came.

It’s too bad, you know – that old house.  Too bad the State didn’t take better care of it during the last sixty years.  The Marshall family sold the island to the State in the 1950’s and the house has been abandoned since.  In May 2009, the State wrote the Flathead Lake Island Management Plan.  This forty-nine page document describes plans to tear down the Cedar Island House sighting several reasons for its removal.  I’m glad to have walked through it and imagine it’s former effulgence before it’s finally put to rest.