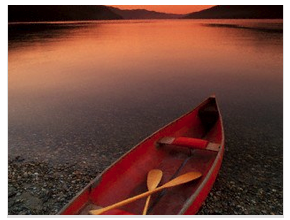 I think I’ve owned 100 pair of sunglasses throughout my lifetime.  I never seem to be able to keep a pair very long.  I’ve broken them, misplaced them, had them stolen.  They’ve been victim of accidents, boots, canine cuspids and general carelessness.  Really cheap ones nearly liquefy after a few hours of dash time in the August sun.  I don’t know the actual lifespan of a pair of sunglasses.  I imagine a Pizza Planet scene from Toy Story every time I get another $5 pair from Wal-Mart.  Except Woody isn’t trying to protect three-eyed space aliens from Sid Philipps but trying to protect the sunglasses from me.

Many summers ago I was at the lake with some friends playing chicken with canoes and having a blast.  It wasn’t the first time these canoes had been immersed in chaos.  We’d reenacted the battle of the Monitor and Merrimac many times with the aid of bottle rockets, firecrackers and ski goggles.  This particular episode didn’t involve any munitions just the velocity that three oars could provoke out of a fourteen-foot Coleman.  Our aquatic battering rams were scarcely off their mark every time we attempted a strike.  Amid the misses and howling nobody realized that Emery couldn’t swim.  He was in the center of my vessel.  We were trying to make a turn but we were not fast enough.  As our opponents charged full-steam-ahead our canoe had taken on the characteristics of a slow swinging barge.

A couple weeks before the lake fun, I was at the gas station with my friend Rod.  He was driving his parents’ 1980 Chevy Citation.  It had a four speed manual transmission and Rod knew how the coax the last bit of muscle from its four-cylinder engine.  He was a master at using the clutch and shifting at just the right time.  Riding with Rod was always fun.  While at the fueling station I saw a pair of sunglasses on top of the adjacent gas pump.  With my curiosity peaked, I exited the vehicle to explore.  They were black Vuarnets.  I couldn’t believe my eyes.  Finding Vuarnet sunglasses added more excitement to the moment than finding $100 on the ground.

During the school year my class transacted a fundraiser and we sold Cat Eye sunglasses.  I was one of the few from the entire student body who couldn’t afford to purchase the Chinese merchandise equipped with faux leather goggle sides installed to provide added protection against high mountain glacial sunlight.  Since there wasn’t any high mountain glacial sunlight conditions for hundreds of miles and since I didn’t have 15 bucks, I never got a pair.

The providential pair of Vuarnets were superior in every way to the Cat Eyes.  I wondered who left them there.  I carried my prize into the store to see if anyone had inquired about loosing some black sunglasses.  The clerk said “no”, so out of obligation I left my name and home phone number and asked if anyone came looking for them to have them call me.  I left the store with a smile and the black Vuarnets on my face.

I was wearing the sunglasses as I struggled with the canoe turned barge.  We were seconds from taking a beating and our opposers were bearing down on the center of our hull.  The collision sent Emery in to the lagoon and the impact carried us several feet away.  At first all we saw were arms, then bobbing arms.  He was disappearing and reappearing from the black.  Without thought I jumped into the water.  We all jumped.  Our bloodthirsty quest for destruction had become a struggle for salvation.  In all the commotion Emery pawed my face banishing the Vuarnet sunglasses to a state of sunken treasure.  They were gone.  Emery was saved.  It was time to go home.

Last summer I spent $20 on four pair of sunglasses – no idea where any of those are.  A few weeks ago I picked up another pair.  They’re already scratched.